“Bye bye Delhi, welcome Agra!” These were the words our driver, Belwant said as we drove out of New Delhi and crossed into the state of Haryana en route to Agra.

But before we said goodbye to the capital we had a couple of final tourist stops – first was Red Fort, which we couldn’t visit the day before as it is closed on Mondays. Commissioned by Shah Jahan in 1639, the fort took nine years to build and served as the capital of the Mughals until 1857, when the last emperor was dethroned and exiled by the British Government. Today the UNESCO World Heritage site is a popular tourist attraction to check out the sprawling buildings and incredible mix of marble, sandstone and precious laid stones that make up the fort.

Despite it being only 8.30am, it was already incredibly smoggy around the fort, but fortunately, barely any tourists were in sight. Paying the foreigner’s entrance fee of 250 rupees (compared to an Indian’s 10 rupees), we entered via Lahore Gate (so-called because it faces the Pakistani city) and walked past scores of shops, which were all closed as we were there quite early.

Strolling past, we saw glimpses of Mughal architecture in its former glory – the royal bath, a pearl-colored mosque inlaid with semi-precious stones including emeralds and rubies, as well as a number of intricate royal apartments with eagle-eye views of the gardens below.

While we were walking, we managed to catch the attention of a couple of Indian men, who were less interested in looking at the fort and more keen on following us around. As we kept walking inside the complex, we walked past about six more men sitting around and chatting, who then decided to join the pair of other men in stalking us by safe distance.

Fortunately Mike and I managed to shake them off when I went to the bathroom (they couldn’t be bothered waiting around for me to come out) – not sure what their motives were but I was happy not to find out.

Last stop in Delhi was Mahatma Gandhi’s tomb, which we had missed out on seeing the day before thanks to US President Obama and his entourage checking it out. Taking our shoes off, Gandhi’s tomb was in the center of a simple garden. The black marble tomb was completely covered by floral garlands except for the one inscription “He Ram” in Hindi – meaning “Oh God”, his final words before he died.

From here started the five and a half hour drive to Agra, which crossed two state borders – Haryana and Uttar Pradesh. While we were surprised not to see many cows wandering the streets in Delhi, once we arrived in Haryana it was cow central everywhere – cars also swerved past dozens of goats, monkeys, water buffaloes and even camels! The yellow/green painted tuk tuks in Delhi evolved to tuk tuks teeming with a minimum of 12 people (at least nine crammed inside, with a few hanging on behind), and we also drove past buses packed to the brim with passengers riding on the roof and bustling markets peddling everything from fruit and vegetables, clothes and everything else in between. The abject poverty here was more apparent than in Delhi – we noted little mud huts not much bigger than dog kennels to house families, women tilling the fields under the scorching midday sun in their bright-colored saris and children using all the strength in their arms to pump wells for drinking and bathing water.

First stop in Agra was Akbar’s tomb, where we were met by our local guide. Known as Akbar the Great, this Mughal emperor not only respected all religions, he influenced much of the art and culture across the country. Dozens of deer loiter in the gardens inside, while the building at the entrance coincidentally looks like there’s a massive letter “A” in the middle.

Other interesting features of the building that houses Akbar’s tomb include the white domes that surround it – if you and someone else stand on diametrically opposing corners and face the wall, you can actually have a conversation as the sound travels up the slopes of the dome (the dark stains on the white marble are evidence that thousands of people have tried). If you stand in the center of the dome, you will find that any sound you make is magnified as again, the sound travels up the structure.

Our next destination was Agra Fort, on the banks of the Yamuna River. The most important fort in India, the fort housed many great Mughal emperors and is a maze of red sandstone buildings, with some that have clear views across the river of the Taj Mahal.

Sadly, Shah Jahan (who built the Taj Mahal for his wife), was forced to live out the last eight years of his life under house arrest in one of the rooms by his son, never being allowed to enter the Taj again but simply look across the river at his grand creation.

Deciding to skip a visit to the Taj Mahal until early the next morning (the optimal time to see it), we retreated to our hotel, the Clark Shiraz. Very fancy and we had a room facing the Taj (unfortunately it was either too dark or to hazy to get a good view), but our food choice that night wasn’t great – I was starving and my chicken was under-cooked, which put Mike and I off our appetites!

The next morning we were in the lobby around 6.30am to make our way to the Taj Mahal, one of the most beautiful and romantic buildings in the world. A thick blanket of haze was around that morning, which made me think that we weren’t going to get a good view, but surprisingly by the time we walked in we were greeted by a gorgeous day as the haze cleared up and made way for the sun to shine through.

The marble changes color as the day progresses – it almost looked a glittery gold at sunrise. Completely symmetrical and apparently earthquake-proof, the Taj is also flanked by two identical sandstone temples from which shimmer semi-precious stones.

The Taj looks all white from far away but when you come closer you see that it has these stones inlaid in them as well – including emeralds, rubies, malachites and carnelians (which glow under a flashlight).

The way of doing the inlay work is a traditional still practiced today – and after our visit to Agra we visited a store that not only showed people filing the stones to precisely fit the marble, but also shelves filled with bowls, plates, tables, elephants and other marble works.

Our final stop in Agra – Fatehpur Sikri, created by Akbar the Great. Again, evidence of his respect for all religions was clear in the architecture, which had a mix of Christian, Hindu and Islamic features. Akbar had a harem of 800 women living here at one point – although now the surroundings are pretty much a ghost town.

The craziest thing we saw there though? A guy who sought money from tourists by jumping regularly into a pool of lime green, moldy water. He definitely deserved a tip!

Check out the video below. 5 Reasons You Should Teach English in China 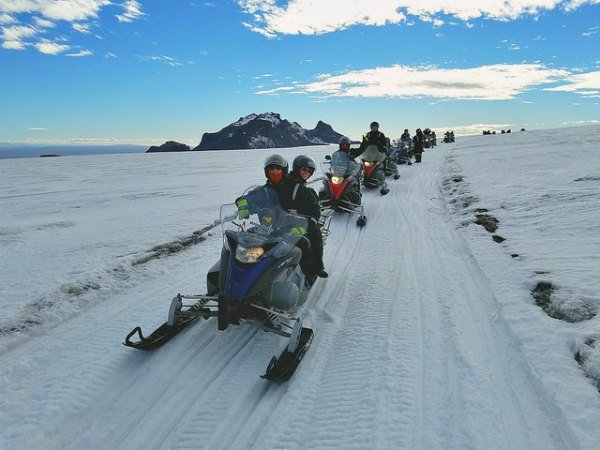 A Snowmobiling Adventure on Langjökull Glacier

3 thoughts on “A Love Story in Agra”